23. Designing a Worksheet – So Very Different

As part of our Materials module, we were asked to create / design a worksheet built around a text of our choice, for a specific group of learners.

I went about this task over the Easter break, and began by sourcing a text that I thought would be of interest to my class of B2/C1 learners. After considering several interesting resources, I settled on a reading text from the Adbusters site, called So Very Different. I explain my reasons for choosing this text a little further down in a mind map.  Here’s the text itself as I laid it out in word – although it may be easier to read on the site itself: 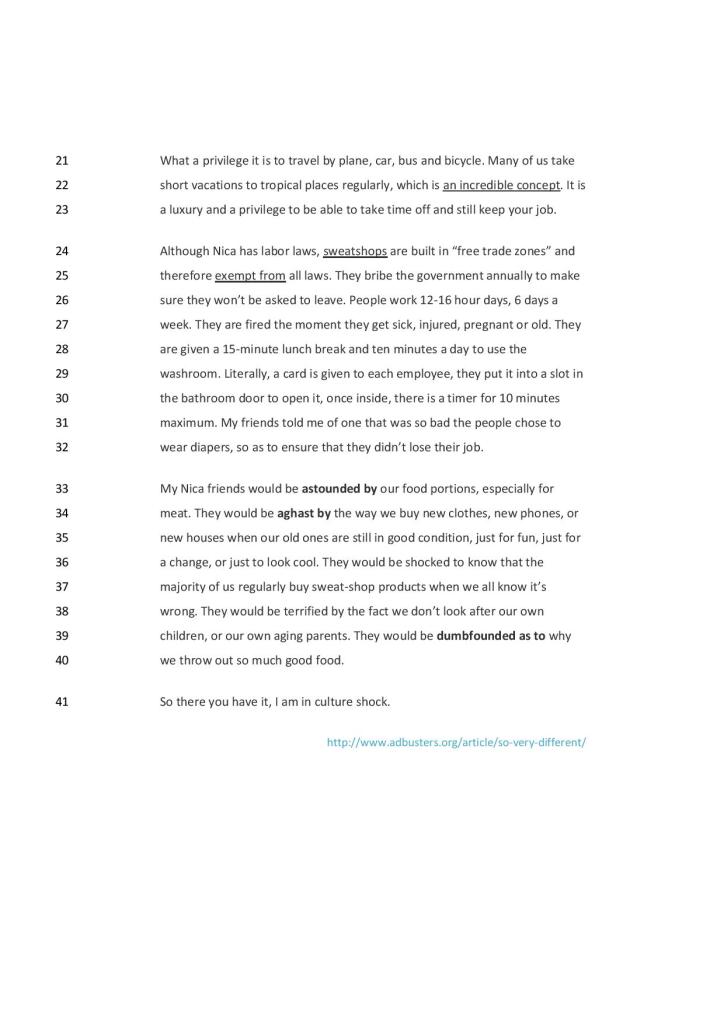 Once I’d chosen the text, I needed to format the layout on the page.  Jason Renshaw’s video on layout was quite interesting, but while I particularly liked the ‘quarter/three quarter’ layout, I wanted space around the text for learners to be able to write notes connected (with arrows, etc) to particular lines – something influenced by my own preferred style of note-making.  The page numbers I added in for practical reasons: as an easy reference for teacher and learners during the lesson.

I then decided to brainstorm my responses to the text in terms of why I like it and what opportunities there are for language practice and topic discussion. Here’s my original brainstorm mind map:

Once I’d done this, I went about actually putting it all together.  It was very interesting for me to observe that most of the decisions I made in terms of the content, I made during the actual design stage – as I went along in MS word.  As I’ve noted on the process flow chart above, I frequently referred back to the brainstorm mind map as well as the text itself, but what was also interesting to observe (especially in light of some earlier posts about intuition) was that a lot of my decisions about both design and content were intuitive.

Because I was aware that this was the case as I was creating the worksheet, I took a few screen grabs as I went along to capture the process a little:

And here’s the result: 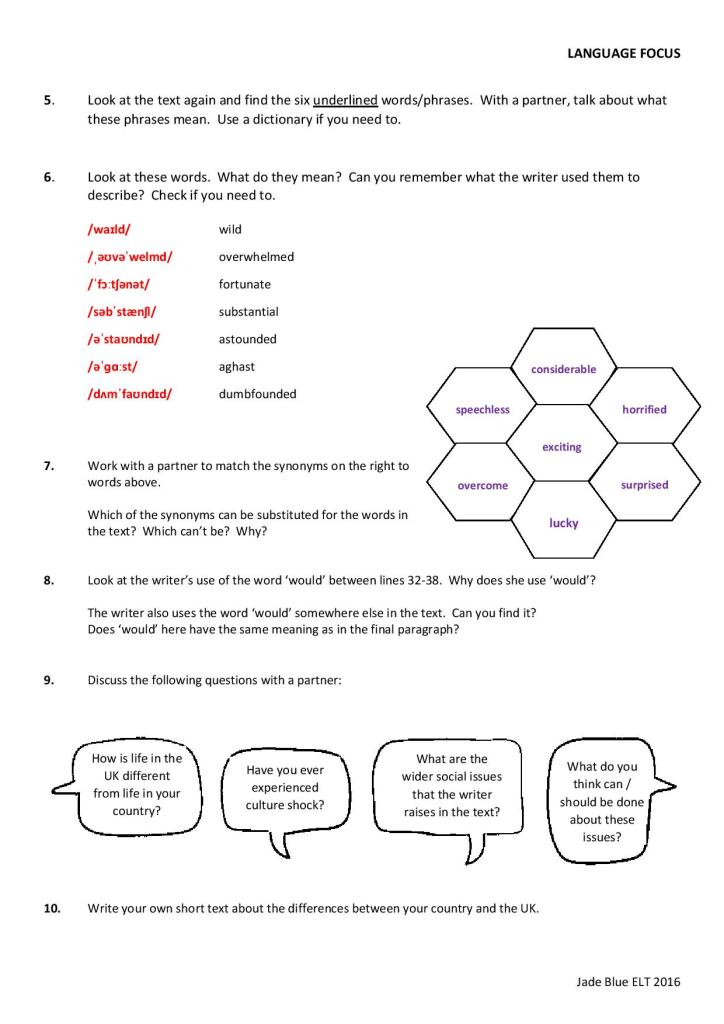 In terms of the layout and design of the worksheet there were two main things I was trying to do:

Similarly, in thinking about the header/footer area, I decided to keep it simple.  While coloured banners in the header/footer area (as Jason Renshaw demonstrates in another video) can help add to the professionalism of worksheet design, they also reduce the amount of space available for notes.  My inclusion of our school logo and a bold title (top left of the page) was a choice I made based on previous worksheets I’ve created at school (especially for Business English classes), in order to provide continuity and consistency.

The word ‘result’ – above – is misleading.  It suggests that it’s finished, which given that I’ve not yet tried it out with a class, it isn’t.  And even then… well I guess that’s where flexibility comes in.  Materials are either never-finished, in that we can go back and adapt / edit them for a particular group, or (in the case of published materials for example) they need to retain some flexibility.  Is that something that’s built into the materials, or something that lies with teachers?  I’d argue a little of each.

I took a couple of weeks of school over Easter to visit some friends in Germany, and it was during that break that I created the worksheet.  When I came back, I was no longer teaching the same group (of B2/C1 learners), and the reading text itself would be too challenging for the A2 class I’m now teaching.

But not one to be defeated, I decided to ask some colleagues to try it instead, and managed to persuade five lovely teachers at school – who are currently teaching B2 or C1 groups – to give it a go.  Although I’m pretty disappointed to not be able to try it myself for a little while, the silver lining is that I’ll now be able to get feedback from five different people who’ve used the worksheet with their own learners, and in their own way.  I didn’t prepare (or give) any accompanying teachers’ notes, but did sit down with the teachers as a group to briefly talk through the worksheet.  At that point I also made it clear that while I wanted teachers to try out as much of the worksheet as possible, they could adapt and supplement to suit their own learners.  Here’s the written brief I gave them to accompany the materials:

So what comes next is a feedback/reflection meeting with my volunteer teachers, which I’m keeping fairly informal – a chance for them to share their experiences of using the worksheet and text with me and each other.  I’ll also ask each of them individually to complete an evaluation form.  I’ll be posting about this a little later, along with anything interesting that arises during our input session on this for the materials module, so there’s more on this to come!

Finally (for now), here’s a flow chart of the whole process: